The root is the descending part of the plant axis which lies inside the soil. The root typically does not contain chlorophyll and therefore it is nongreen. It bears lateral branches and a protective cap at the apex.

Root doesn’t have nodal divisions; however, it is divided into five main areas on the basis of the growing stage of cells present in that area. The five areas are.

Root doesn’t have nodal divisions; however, it is divided into five main areas on the basis of the growing stage of cells present in that area.

The Five Parts of Roots are 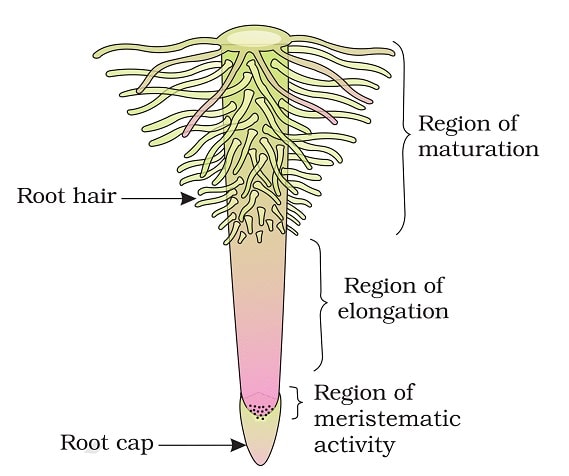 Root cap– also called calyptra, its a cap-like protective covering over the tip of the root. The root cap is the region of graviperception. The cap is multicellular and made of parenchymatous tissue. The cells secrete mucilage, which acts as a lubricant thus allowing the root to pierce the soil and descend downwards with greater ease. The outer cells of the cap get sloughed off due to friction, and these cells are replaced by new cells from a growing part. A broken or injured root cap is replaced.

In many aquatic plants, the tip of the root is covered by a loose elongated sheath called root pocket. This root pocket functions as a balancer. An injured root pocket is not replaced.

Growing point- also called the meristematic region, it is a small area in the subapical region. The cells present here are meristematic in nature and are thus small, thin-walled with dense protoplasm. It occupies a small fraction of the root length, and the cells here divide continuously to add new cells to the root cap and the zone of elongation. Thus it is responsible for the increase in the length of the root.

Zone of root hairs- also called the zone of differentiation or zone of maturation. In this area, the primary cells differentiate to form various cells with specific functions. Xylem and phloem are formed to help in the conduction of food, water, minerals, hormones, etc. The cells on the surface differentiate and develop into epiblema. Epiblema cells differentiate and develop into the tubular outgrowth of root hairs, which help in the absorption of water from the soil. This region is 1 to 6 cm in length. Root hairs are not permanent, and they shrivel up after some time. However, the growth of the root keeps the size of the root hair zone nearly constant. The new cells pass into the zone of elongation, and the oldest cells pass in the zone of mature cells.

Zone of mature cells- this zone contains mature cells. The surface in this zone has thick-walled impermeable cells through which there is no absorption of water or minerals. At places, endogenous growth produces lateral roots. Secondary growth may occur in this zone in dicots and gymnosperms.