How Are ATP And ADP Related?

Both ATP and ADP are involved in energy processes in our body. They release energy when their phosphate bond is broken.

Approximately 7300 calories per mole of ATP is released from each bond and inside the body the same bond releases around 12,000 calories.

When energy is needed, the ATP breaks down to ADP and releases energy.

Immediately ADP is converted to ATP to replenish to lost stores.

However, the ATP has high levels of energy that ADP as it has 3 bonds. ADP has low energy comparatively.

When ATP converts directly to AMP, the energy released is 24000 Cal/Mole.

Chemically both have adenosine in their structure. This adenosine is a nitrogenous base having an adenine, a five-carbon sugar namely ribose, and phosphate groups.  ATP molecule has one phosphate group more than its precursor ADP.

Both ATP and ADP have one monomer of an adenine nitrogen base and also one carbohydrate monomer i.e. ribose a 5 carbon sugar. 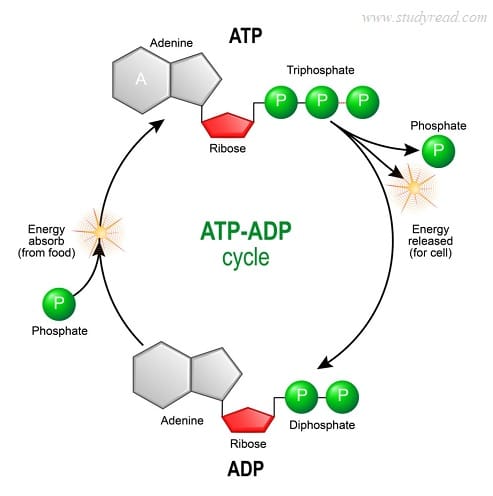 The phosphoanhydride bonds present in these molecules are the reason for high energy generation. These bonds are present in both ATP and ADP where the energy is stored.

Constant formation and destruction in the living body

Both ATP and ADP are in dynamic equilibrium which means both of them are constantly formed and broken down to satisfy the energy needs of the body.

They are metabolized by hydrolysis reaction.

ATP is needed to provide energy for different proposes like synthesis, ion transport, muscle action, nerve conduction, etc. So ATP is present in every part of the body. Since it is also broken down into ADP, even ADP is present in all the cells.

With just an addition or removal of a phosphate group, both ATP and ADP are interchangeable in structure.