Bacteria are unicellular microorganisms living on the earth and its atmosphere.

They are prokaryotic cells and hence have no nucleus.

They can live in any extreme climates and are omnipresent.

They grow in colonies and can live as saprophytes and also as parasites.

In humans, animals, and plants, they cause many diseases.

Due to this, their identification is important in disease diagnosis.

Identifying them is possible by color, shapes and also colony characters.

However, we will see bacteria based on shapes here.

Identify the types of bacteria according to their shape Spherical bacteria: These bacteria are spherical in shape. They can be single, in two, four numbered. They are oval, circular or spherical in shape. Bacteria causing pneumonia and gonorrheal infection have this shape.

Comma-shaped: These bacteria are comma-shaped or hair-like. The best example of this type of bacteria is cholera bacteria.

Spiral: These bacteria are long and spiral in shape. They are spring-like with slight coil structure. Examples of this bacterial shape are syphilis bacteria. It causes infection to the genitals in both male and females.

Spore form: These are bacteria which are formed into a protective form. They are seen in case of extreme conditions in which bacteria cannot survive. 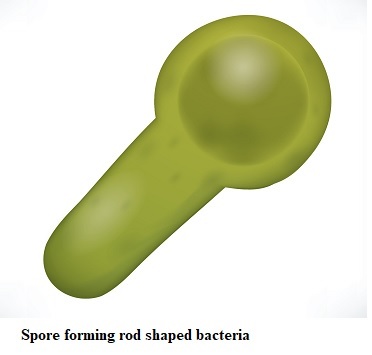 Once the conditions are favorable, bacteria get of these spore forms. All the types of bacteria transform into the spores. It is also considered a type of bacterial reproduction.

Staphylococcus: These bacteria are a bunch of spherical bacteria. Bacteria with different shapes are easy to identify once they are stained. They can be visible under the microscope in movable form or immovable form.